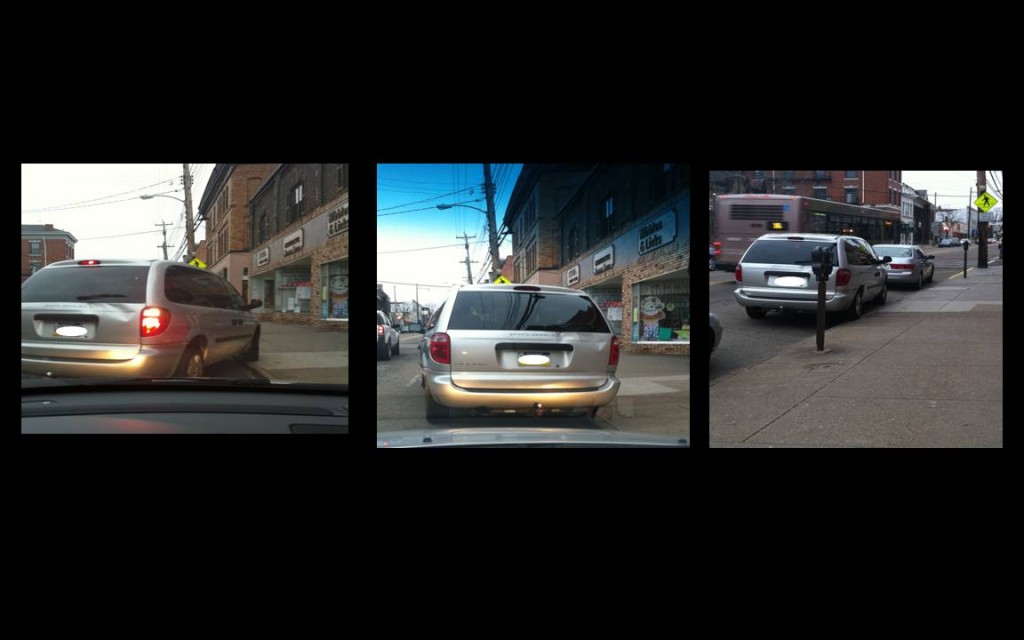 Happy Tuesday yinz!!!  For some reason our blogging App is broken.. BUSTED as a Pittsburgher might say.  We can’t load the Jagoff Pics.  Today’s post WAS going to be the guy that tried to break into the Steelers locker room with a hammer.  But….

So here’s a RE-BOOT of a blog post from a while ago!

With this kind of photo set, you’d think the ONLY thing that I have to do each day is sit and wait for Jagoffs to arrive.  Unfortunately not.  It just happens.  Here I am sitting in my car waiting for a local breakfast joint to open up.  Not sure why this guy caught my eye but I had the iPhone ready.

Parking Maneuver #1:  He pulls in up over the curb

Parking Maneuver #2: He tries to get his back end in and can’t

Parking Maneuver #3:  He backs back out into the street and pulls in up over the curb again

Parking Maneuver #4:  He gets the back tire up on the curb, puts the minivan in park and walks down the street.

Honestly, I thought I was being PUNKED with what was happening and the speed at which he parked!  Where did the parallel parking instructor go wrong?  And this guy was old enough to have learned it when it was REALLY tough – before power steering.

The best thing was the cockiness with which the driver got out of the minivan, like, “Yeah, it’s on the curb, that’s as close as I can get it so @#$ it! (Therefore my nickname for him, Curby Puckett.)

So, my main man Curby, that thing called a “curb” should be used as a “feeler”, not a wheel chock.  I’m guessing I know how ya got those dents in the tailgate, that whole “juding your car” thing seems to be fairly elusive.   Not sure where ya learned how to park, but, I can tell ya, you park worse than a 17-year old girl, that’s smoking, talking on her cell phone and checking her eye make-up at the same time she’s parallel parking, YA JAGOFF!

That Left Turn That Isn’t A Left Turn (Temporarily)