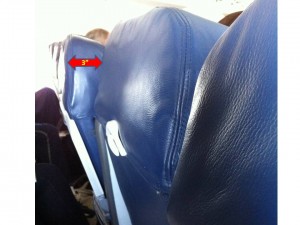 Traveling right now so posting this as a REWIND.  Originally posted 7/2011 but it make total sense today!!!

In the meantime, who made this rule?  Does the position of the seat back REALLY change my safety factor?

Why is it such a big deal that I “return my seat to its upright position” for safety reasons.  The space difference between my seat back  in its “reclined” position and its “upright positoin” is about 2.5″.

If we crash, do we actually think that 2.5″ difference between reclined and upright positions is actually going to make a difference in whether or not I make it out of there when we hit the ground at 400mph, YA JAGOFF?