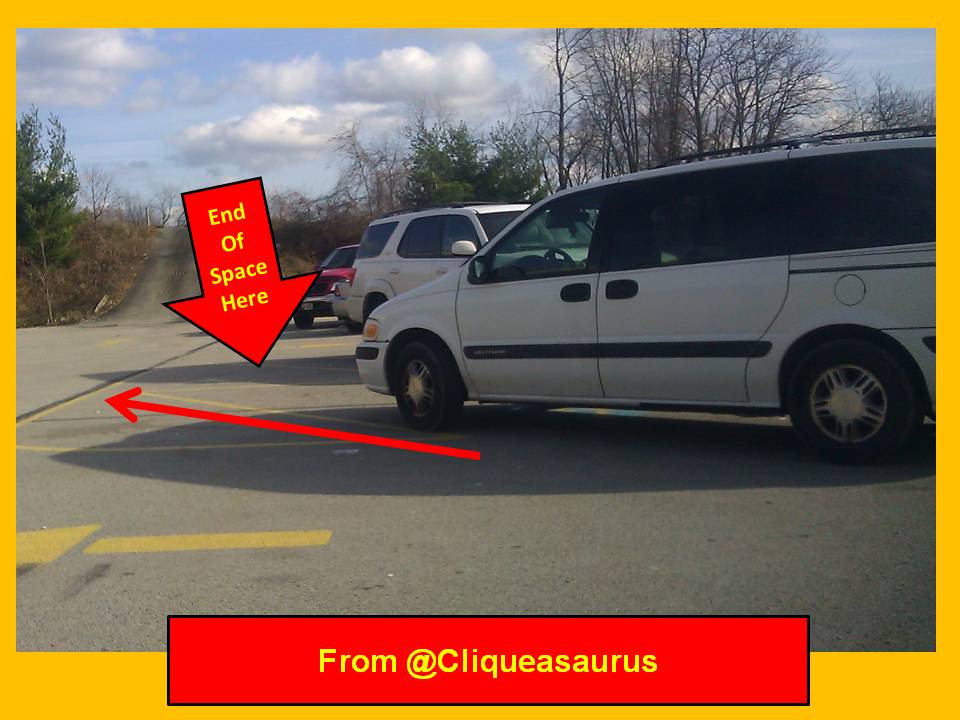 Tis the season to be…… a parking idiot.

Rather than make an entire week of jagoff parking attempts, we decided to double these up.  No doubt that the rushed shopping season and school Holiday shows brings out the most selfish of parking attempts – by family minivans none-the-less.  (Thought that minivan drivers were pleasant, mild mannered, family people)

The pic on the top, did fine between the uprights but seems to have forgotten that you’re actually supposed to pull all the way into the space as you’re running into the Delmont Dollar General.

The second pic came with this description:

When this guy parked, there were less than 10 cars in the entire lot. I watched to see if he was limping or that grandma was hobbling along, no dice. Since he was an hour early for the show, there were only 9,990 spaces left. He was just a rude jagoff that wanted to pull a Jeff Gordon and go screaming out of the lot first.

You know us.  We ALWAYS look for reasonable explanations/excuses for this stuff as opposed to believing that people can be THIS selfish, self-centered and disregarding to others…especially during the “Happiest Season of All!”

Like the person in the white van that pulled about 1/2 way into the parking spot.  Since they were getting things at 1/2 off, maybe they thought they were only permitted to use 1/2 of the space?  Or, is it possible that this particular driver is used to driving a transit bus with one of those bike racks on the front?  Old habits die hard … just looks like they were expecting to have about 18 bikes or a couple of quads stuck to the front!!!

Now the person parking directly on the “No Parking” spot while there’s still hundreds of spots left in the school lot.  Is it possible that they paid extra in their School Taxes and, in return, are permitted to use this spot for, the latest craze, elementary Holiday-Show tailgating?  Could it be that @biggdeck is just mad cause he didn’t get invited over for a burger and rack of ribs before the show of marginally-good-but-insanely-cute-elementary-singing started?  (Nope!)

Hey mini-van drivers, we do have ONE thing to thank you for….NOT USING THOSE SILLY STICK FIGURE DECALS ON THE BACK OF YOUR VAN THAT SHOW US THE FAMILY MEMBER AND FAMILY PET COUNT!!!!  When those things start to wear off, they look like a tough game of “Hangman.”

On the other hand, maybe we SHOULD have some type of family roster for you.  That way the rest of us can get a headcount on how many kids are going to potentially be taught how to drive, AND PARK, from your families.  THAT will allow us start intervetions now— like, smacking your kids upside the head when they leave their mini-jeeps and Big Wheels in the middle of the driveway, Ya Jagoffs!

Am I REALLY Driving In A Blizzard??

Half Naked Drunk Woman Running Free In Fayette County – Can...