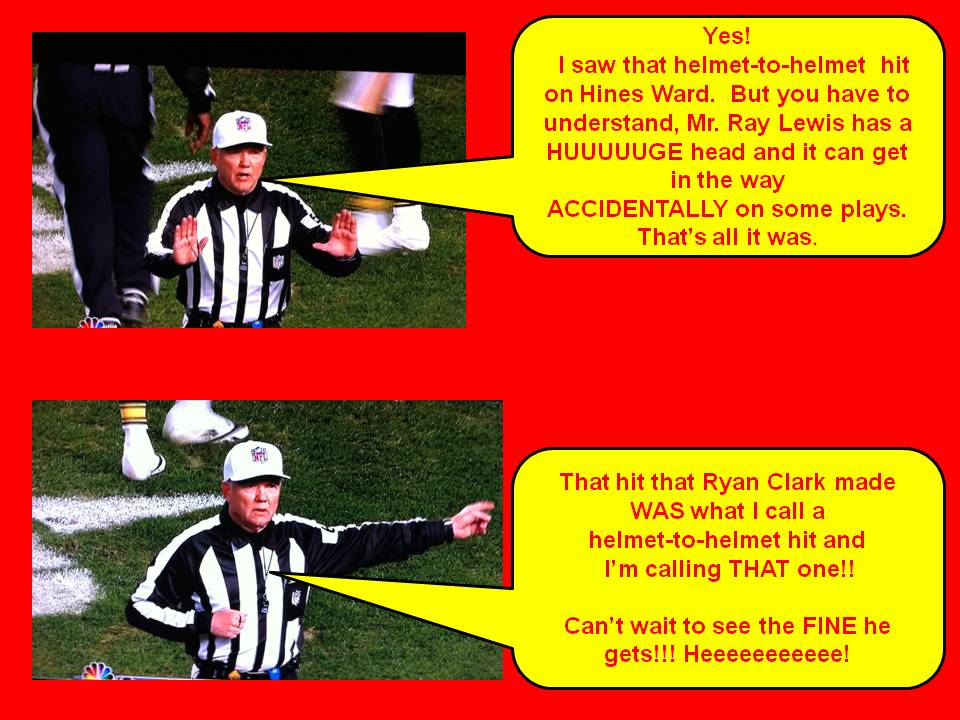 WOW…. that Steelers game stung last night.  All night we monitored Twitter and Facebook about who/what to post today.  Joe Paterno?  Penn State Admin?  The Ravens’ Ray Lewis (just because he is Ray Lewis AND for the uncalled helmet hit on Hines Ward)?

While the referees didn’t COMPLETELY lose the game for us, (The Steelers had a few problems of their own) they DID have a little bit of an GAME AWARENESS issue (usually caused by constipation at that age).  To not call Ray-I’m-a-criminal-but-trust-me-cuz-that-hit-on-one-of-the-Steelers’-most-important-players-and-drives-of-the-game-was-inadvertent-Lewis for a helmet-to-helmet penalty  then to make the discretionary call on Ryan Clark’s helmet-to-helmet penalty seems to be a bit of ………..well……..Jagoffery!!!

Sure we’re mad that we lost and we WANT to feel like sore losers today so we need someone to blame.  Therefore, the Twitter Jury has spoken.

Hey stripes, we realize that the the NFL Rules Book is about as confusing as the Farmer’s Almanac AND interpreted about as many different ways as the IRS Code between 15 CPAs, but when a helmet hits a helmet, we think it probably makes a noise.  And if you would have been paying attention vs. trying to figure out if today’s late-morning breakfast was going to be prunes or a bran muffin, you MIGHT have noticed that CLANG noise when Ray Lewis lunged his head into #86’s head, Ya Jagoffs!!!!

Thanks to Twitter Followers @rach4Steelers (Minnesota) and @ThatsDrJagoff2U (Parts Unkown)

for being some of the followers to weigh-in!

FACEBOOK NOTE:  Last night we transitioned from a PERSON Facebook Page to a FAN Facebook Page.  It was a little trying as the Ravens were marching 92 yards.  We lost a few of our latest friends…. if you’re one of them please go like the page on Facebook HERE.