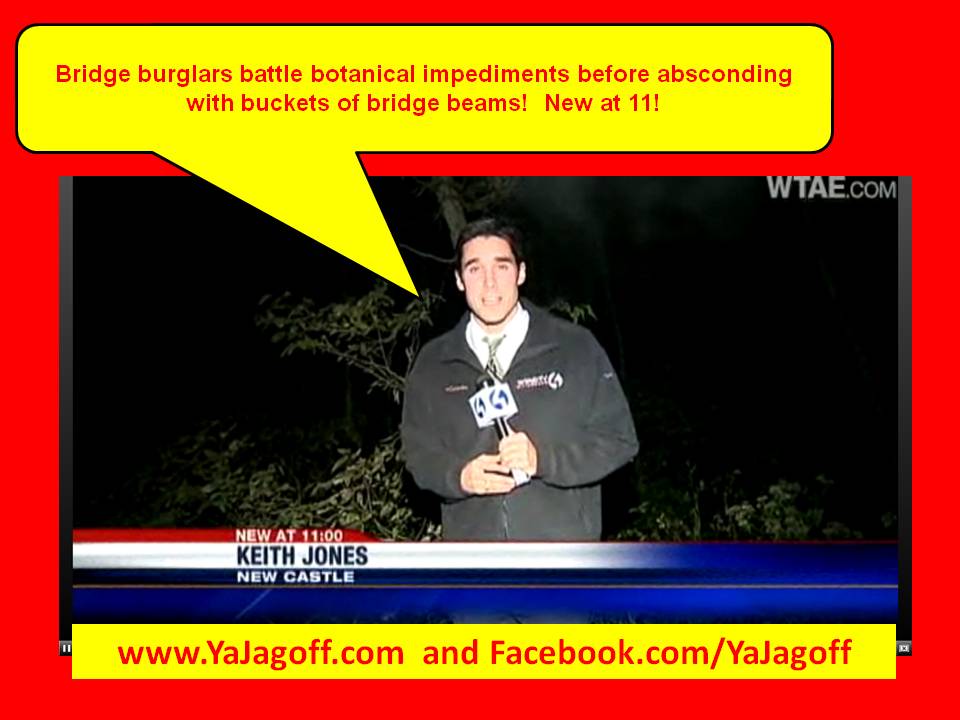 Click Pic To Watch The Video (It’s worth it.)

This story causes us to pose the rhetorical question, “If a bridge gets stolen in the middle of the woods, AND NOBODY HEARS IT GETTING STOLEN, is it STILL stolen?

In case you are unaware, some thieves found a 20-foot wide by 50-foot long bridge made of steel beams and corrugated steel in the woods of Lawrence County.  Then they stole it by cutting the bridge into small pieces with torches and tools.  (This seems a little more difficult than stealing a whole Gullifty’s chocolate cake one piece at at time.)

Seriously, how remote was this bridge that not a soul heard or saw ANYTHING for the entire time that it took these bridge-burglars to cut, drag, cut some more, drag, lift pieces into a truck and haul away a bridge that is “hundreds of pounds per foot” according to the WTAE-TV report!!

This begs the second and third questions simultaneously – “If nobody heard it happen, then how did anyone know to report it missing?” along with “If the bridge is SOOOO remote that nobody saw it being stolen, WHO CARES IF IT’S GONE?”

So many parodies, so little blogging space. (Hey, pssssst, over here, pssssst, bridge abutments or I-beams, only fie-dolla!”)

Hey, bridge-burglars turn yourself in!!!!!  The writers of YaJagoff.com will represent you!!  We have a plea bargain that not even Jim Ecker would think of.

First, tell everyone you are demolition experts.  Use the Lawrence County bridge example as your resume.  Then, tell the Allegheny County and Pittsburgh politicians how they could have saved all those Civic Arena legal costs if they would have just hired you guys for one night, about 3 months ago to STEAL THE CIVIC ARENA!!!! (All the hysterical-historical-protesters “It was just there YESTERDAY!!!)

Now the ONE problem you guys DO have against ya is, what in THEEEEEEEE HELL do you do with tens-of-thousands-pounds-of-bridge now that this has made the news, YA JAGOFFS!!!!

REMINDER:  It’s Breast Cancer Awareness Month (Tired of us saying it yet?)

Guys and girls, be sure to check your humps for LUMPS!!!!