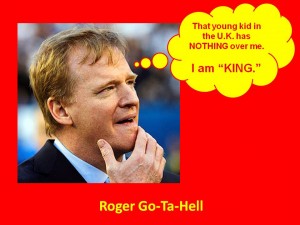 So they NFL agreement with the players was in jeopardy because ol’ Roggie Babee wanted to be the only person who randomly assesses fines and acts as the appellate court too.

Players objected to the idea that Goodell could decide appeals of disciplinary measures imposed by him.

We guess Roggie just wants to be everything, Judge, Jury aaaaannnnnnnnd, YEP, you guessed it, Jagoff.

No wonder why we officially named you Roger Go-ta-Hell, YA JAGOFF!

Steelers: Polamalu Imposter Gets on Field with Team