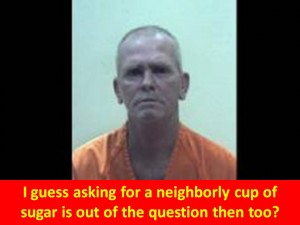 Once again, Fayette County gets a laugh on someone else (See Previous Post).  Old Phil Manley was soooooo mad at his brother-in-law for not letting him borrow some string for the weed whacker that he chose to shoot at him.. errr, ahhh shoot the pavement!!  Either way, gun vs. weed whacker string is enough to scare the natural lawn fertilizer outta me!!!!!

Then again, maybe the story isn’t really what happened. You know what its like when you get to the end of that weed whacker string when you are in the middle of manicuring the lawn, right? You’re PISSED cuz you MEANT to pick up an extra the last time you were at the hardware store.

Well, do ya think Phil was just mad that he ran out of string and he only had 2 more weeds to whack so he pulled out his gun (that he NORMALLY carries while he’s landscapin’ like most of us do) and tried to whack them with bullets?????

Hey Phil not-so-Manley, if I lived next to you, my house would look like the Let’s Make A Deal gameshow set.  That way, I would KNOW that I have WHATEVER it is you need to borrow and then ya won’t shoot my sidewalk up, Ya Jagoff!!!

THE ‘CEREAL’ LAZY PERSON IN THE HOUSE

Another Family Day.. Mother and Son This Time