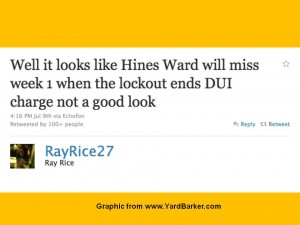 OK.. there are a lot of people that like Hines Ward and what he has done for the City and rep’ing himself.  This DUI thing looks ominus but nobody seems really ready to judge him until official judgement occurs.  The Tweet above came from Ray Rice of the Baltimore Ravens who started the “judging.”  He and Ryan Clark “engaged” about the incident on Twitter.  Click the graphic for the story.

Unfortunately, the police report narrative (via the Post Gazette) of Hines’ incident looks like a script from the Dancing With the Stars program,

“…swayed back and forth and was getting agitated while conducting the evaluation,” which also included a “walk and turn” test and “the one leg stand.”

“Mr. Ward could not keep his balance and started before instructed several times before told to during the instructional stage,” the officer wrote. “He missed heel to toe, stepped off line and conducted an improper turn.”

In the meantime, until official judgement is passed, Ray Rice breaks all rules of proffessional courtesy to grab a headline.  Fortunately, Ryan Clark remains a class act in the coversation by simply responding, with class but a purpose: 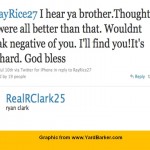 Hey Baby-Ray, looks like Ryan Clark has ya scheduled to miss a few weeks of yer own!!  The next time you and Ryan “Engage” the term TWEETING will be referring to the noises in your head,” Ya Jagoff!

REMINDER:  We are posting every day this week.  Too many Jagoffs to keep up with!

The THIRD Jagoff of Super Bowl 45