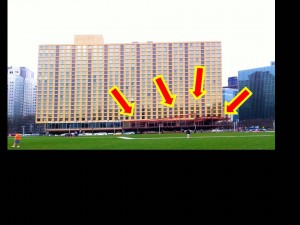 If yer from Pittsburgh you know this place as what USED to be the Hilton Hotel.  You also know it as one of the first things ya see as ya come out of the famous Fort Pitt tunnels for that “I told ya this place was AWESOME” moment!

So this goes aht to the City leaders who let this go on as much as Dr. Kiran Patel, the current owner of the hotel, whomever the secret bankruptcy trustee might be AND anyone else dodging responsibility on this.    Howzabout one of those think-tank kinda meetings where we brainstorm something to cover this thing up?  I’m thinking the meeting would take about 18 minutes to decide if we were gonna hang a big Terrible Towel, or a “Let’s Go Pens” or “Lets go Bucs” or, something even MORE inventive, a “Welcome to Pittsburgh” sign.

Maybe we’ll just get lucky and visitors will think the construction is part of the Point Park/Fort Pitt Museum reconstruction and that there’s gonna be a water slide from the hotel to the iconic fountain at the Point!

Howzabout I suggest a new name for this hotel: “Hotel 28.”  Yep, named after another NEVER-ENDING local  construction project called Route 28, YA JAGOFFS!

(For those of you NOT familiar with Pittsburgh, Route 28 is a road that has been under construction, destruction and REconstruction since our namesake, William Pitt, moved aht of the City to the upscale Fox Chapel neighborhood which occurred once he started his post-politician career as an NBC Today Show Political Consultant gig around the 1760s!)