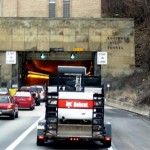 When writers can’t come up with something new to write we RECYCLE something and call it “VINTAGE.”  So a “VINTAGE” posts mean I was struggling so I used and “oldie-but-goodie” Pittsburgh post.

The photo is the Squirrel Hill Tunnel and, if ya don’t ALREADY know, there’s a strange PHENOMENON about everyeone slowing down as they enter the tunnel which eventually causes HUGE traffic jams and STROKES in some drivers like me.

So there’s two lanes leading up to the tunnel, two lanes going THRU the tunnel and two lanes GOING OUT the other side of the tunnel – what the hell’s the prob?

Seems to me that INSIDE the tunnel is where you should get yer car up to 120-140 mph, WHATEVER IT CAN DO, cuz there CAN’T possibly be any cops on the side of the road to pull ya over, YA JAGOFFS!

Look At This Tailgating Jagoff !

So Many Gas Pumps From Which To Choose