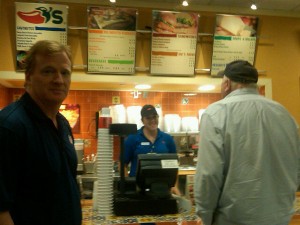 Note, this is the SECOND TIME Roger Goodell has been named by this site in our short existence!  Some people just can’t stop puttin’ their foot in the bucket.

We understand Ben did what he did.  But, ROGGEEE Baby, telling private meeting stories to a reporter????  WOW!!!  Thank GOD the NFL has a policy of  “not discussing personnel matters in the media” cuz, otherwise, some stuff might have leaked to a reporter named Peter King who might take advantage of publishing it right around the Super Bowl!!! If THAT happened, you might have just as a surprised look on yer face as in the photo above when John Madden told’em yer were paying for his 37  orders of Big Mouth Burger Bite Combos!

WAIT!  Now I see it.  That DID happen and you DO think your God cuz those letters are in yer name (G-O-D).  Well, guess what, to Pittsburghers, your name, Roger GOODELL, sounds more like Roger GO-TA-HELL!!!

See ya Super Bowl Mondee with our trophy Roggeeeeee Babe, YA JAGOFF!!!

Thanks to Honorary Jagoff Catchers (and Twitter Friends) @nicolediperna and @Sherry403 for the suggestion!

Photo credit from : The Pigskin Doctor

Steelers: Polamalu Imposter Gets on Field with Team